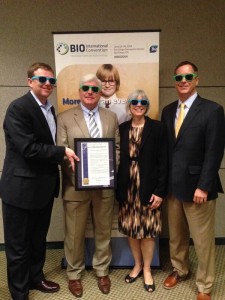 The International Convention of the Biotechnology Industry Organization, better known as BIO, is coming to San Diego on June 23-26, 2014 at the Convention Center.

A press conference was held May 14 at the beautiful Janssen facility in San Diego. The panelists were Dr. Diego Miralles, Global Head of Innovation, Janssen Pharmaceuticals; Scott Whitaker, COO and President of BIO International Convention; Joe Panetta, CEO and President of BIOCOM; and a representative of San Diego Mayor, Kevin Faulconer.

Dr. Diego Miralles gave the welcoming remarks and highlighted the strategies that Janssen is taking to innovate health care and drug discovery. Janssen provides space and support to more than 30 biotech and pharma start-ups in its ?incubator? in San Diego, and plans to open or increase the size of its other incubators in California and elsewhere. Johnson & Johnson is one of the major BIO sponsors, together with other industry players such as Abbvie, Takeda, Lilly, Amgen, and Medimmune, just to name a few.

Scott Whitaker, Joe Panetta, and Kevin Faulconer?s representative, highlighted the significance of BIO for the life science industry and for San Diego?s economy, and the innovation going on in San Diego.

This is the third time that BIO is coming to town, and many things have changed since 2001 and 2008. BIO is getting bigger and better, with 15,000 professional in attendance coming from 47 US states and 60 countries around the word, and 1,700 exhibitors.? In addition to business forums and discussions of various business issues and talks by over 800 speakers, attendees have scheduled 28,000 one-on-one meetings to set up potential partnerships and collaborations. And there will be 2 keynote speakers who don?t need any introduction: Sir Richard Branson will talk on Tuesday, June 24, and Hillary Clinton on Wednesday, June 25. Although one member of the audience wondered why the President is not going to give a speech, no, Mr. Obama is not coming to BIO!

The importance of BIO can also be assessed by the economic impact on San Diego, with an estimate $ 56 million in revenue, twice as much as Comicon!

Since the last time that BIO was in town, many things have changed also for the scientific community in San Diego. Mr. Panetta listed the innovations that happened here in the last few years: from sequencing of the human genome, which is now a reality, to the establishment of research institutes such as the Sanford Consortium for Regenerative Medicine, to the J. Craig Venter Institute, and to Dr. Venter?s most recent venture, Human Longevity. Biofuels and sustainable energy are becoming a reality as well, and San Diego is at the forefront of these innovations.

We are all excited about BIO coming to San Diego next month and today?s press conference was a great introduction to this great convention.