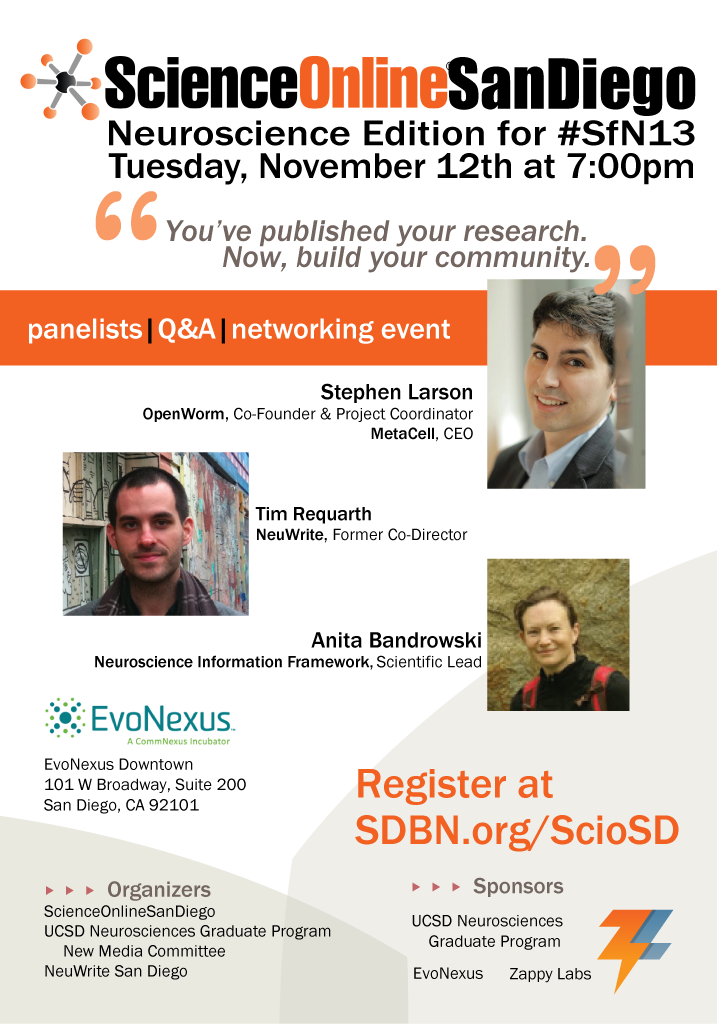 The San Diego Biotechnology Network is involved with the local ScienceOnline San Diego chapter and we are thrilled to help promote an event downtown coinciding with the Society for Neuroscience 2013 (#SfN13) meeting November 12th. We believe that when scientists collaborate online, everyone benefits.

When success in science today depends not only on getting published, but on finding users for a resource or collaborating beyond institutional walls, communication is a key component to successful science. We’ll be featuring neuroscience projects and resources that are using online resources like Twitter, Google+, and Github to do science and build community. Join us as we bring together scientists, technologists, and communicators to improve how to we do and communicate science online. Click here to register and note that this event is within walking distance of the San Diego convention center for #SfN13 attendees.

Dr. Trish Whetzel is the Project Director for the NIDDK Interconnectivity Network (dkNET) and Social Media Manager for the Neuroscience Information Framework (NIF), continuing the NIF outreach activities initiated by Dr. Jonathan Cachat. Dr. Whetzel previously worked as the Outreach Coordinator for the National Center for Biomedical Ontology (NCBO) at Stanford University. She is actively involved in social media, managing the NIF and dkNET accounts as well as her own personal account. In her work with NCBO she presented at over 50 scientific conferences on both technical and scientific research findings as well as technology demos. Dr. Whetzel has a Ph.D. in Microbiology and moved into bioinformatics and biomedical ontologies during her postdoc at the University of Pennsylvania. She continues to be involved in the development of biomedical ontologies.

Stephen Larson is a co-founder and the project coordinator for the OpenWorm open science project which aims to reverse engineer a whole organism in an in silico digital model. He currently works as the CEO of MetaCell, a systems biology informatics company. He previously served as the Chief Information Officer of One Mind for Research, a non-profit dedicated to eradicating brain disease by transforming the healthcare research system via public-private information technology partnerships. He has worked as a professional software engineer for a major New York City investment bank, co-developed a patent, presented at more than three dozen forums, published in academic journals such as Frontiers in Neuroscience and Nature, and has had his work featured in the Atlantic, New York Times, Wired, Discover, and MSNBC.com. His diverse educational background includes a bachelor of science and master of engineering from MIT in computer science as well as a Ph.D in neuroscience from the University of California, San Diego. Stephen is passionate in how computer systems can help us to understand fundamental principles of life.

Tim Requarth is an NIH National Research Service Award fellow and doctoral candidate in Neuroscience at Columbia University, where he also teaches science writing. His work has appeared in publications such as The New York Times, The New Republic, Science, Scientific American, and Current Opinion in Neurobiology. He co-directed Neuwrite, a New York-based collaborative working group of scientists and writers, from 2009-2013. He is currently at work on a book about traumatic brain injury and the criminal justice system.

Directions/Parking: If driving, park under the building (entrance on Front street) and bring your ticket to be validated. If walking from the San Diego Convention Center, head West on Harbor Drive (take a left as you exit from the front). Pass the Marriott and turn right to go north on Front Street. Walk 5 blocks. The building is the tall one on your right after you go under the building that spans over Front street, between E Street and Broadway.