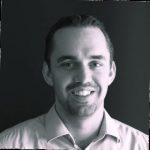 Michael Heltzen is the CEO of Cardea Bio. He envisions a time when biology is part of the technology. What exactly does that mean?

We currently use aspects of biology to observe or manipulate living systems. But often we are measuring at a moment in time. His vision is to use biological molecules as sensors to continuously stream information through electrical signals much as a transistor works in a computer, communicating on and off states of binding interactions for example.

As an analogy, it would be difficult to understand soccer from a collection of still photos. But watching a broadcast of a full game, one would have a better understanding of the rules and the objectives.

He described for me the work they have done so far using graphene as the basis for this new technology.

We switched gears in the last part of our conversation. Michael explained why he chose San Diego over the Bay Area as the home for his business.